Many of the names of the outlaws in the Wild West have lived on through books, TV shows, old newspaper clippings and wanted posters. One of the era’s most notorious bank and train robbers was Butch Cassidy, who formed The Wild Bunch and later partnered with The

Sundance Kid. Their criminal activity took place in the late 1800s and early 1900s, and many western stories are based on their lives. The circumstances surrounding Cassidy’s death are uncertain, and several stories suggest he may have survived the shootout that was reported to have killed him.

Butch Cassidy was born on April 13, 1866 in Beaver, Utah as Robert Leroy Parker. He left his family’s home while in his early teens to begin working on a dairy farm. Here he met his mentor, a cowboy and cattle rustler, going by the name of Mike Cassidy. Parker worked on several cattle ranches, and at a butcher’s shop where he was given the alias ‘Butch.’ He soon adopted the last name of his mentor, as an honor, and Butch Cassidy was born.

Parker continued to move around, ranching wherever he could, until he settled in Telluride in 1887. In June 1889, his career as a bank robber began, when he robbed the San Miguel Valley Bank, along with three accomplices. They escaped with $21,000, fleeing to Robbers Roost in southeast Utah. In 1890, the outlaw purchased a ranch on the outskirts of Dubois, Wyoming, across from the Hole-in-the-Wall formation, where many outlaws lived. In 1894, Cassidy was arrested, for stealing horses, and served 18 months in Wyoming State Prison before being pardoned in January 1896. 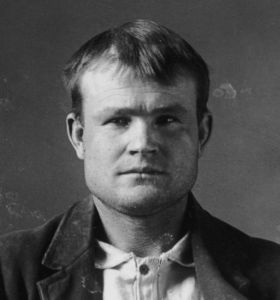 After leaving prison, Cassidy began hanging out with the soon-to-be members of The Wild Bunch gang, including his best friend William Ellsworth ‘Elzy’ Lay. The original gang had six other members and after their first robbery on August 13, 1896, Cassidy recruited Harry Alonzo Longabaugh, better known as The Sundance Kid. The gang planned the details of each robbery, often separating after and meeting up at a predetermined location, normally Robber’s Roost, Hole-in-the-Wall or a brothel in San Antonio, Texas.

After they robbed a passenger train near Wilcox, Wyoming, Butch Cassidy and the members of his gang became major targets for the authorities. A shootout between The Wild Bunch and law enforcement resulted in the death of Sheriff Joe Hazen, and a massive manhunt ensued. Information about their whereabouts was passed to a Pinkerton detective, Charlie Siringo, who was assigned the task of the capture of the outlaws. They remained hidden in Hole-in-the-Wall until July 11, 1899 when they conducted a train robbery near Folsam, New Mexico, during which Sheriff Edward Farr and Henry Love were killed by Elzy Lay. After Butch Cassidy’s best friend was arrested, convicted of murder and sentenced to life in prison, he began to hunt for a way of getting out of the eye of the law.