A major part of relocating the tribes was to ensure that they left their original ways behind and adopt European culture. Laws were established to ensure that Caucasian settlers, who were sympathetic to their cause, did not become involved in their attempts to maintain their ways.

Boarding schools were built close to the new territories, mostly by Christian missionaries, in order to integrate the next generation of Native Americans into the society. The experience proved to be extremely traumatic for many of the children, because they were unable to continue speaking their tribal languages, or practice their religions.

The Native Americans and War

Armed conflicts between European settlers and the indigenous people occurred across the entire country from shortly after the settlers arrived, until 1924. The main causes were the forced American settlement of their lands, as well as the depletion of the natural resources which were needed to survive.

During the American Civil War, both sides employed Native Americans to fight for them. They complied, even with the knowledge that much of their freedom and practices would be lost if the side they were fighting for won. Many of the tribes were actually in support of slavery, which was one of the main causes of the war, as they kept slaves themselves.

When the Europeans arrived in the Americas they believed that the indigenous people lived like those in children stories. This was one of the reasons cited for the extended colonization of the lands. There was the belief that because of their closeness to nature and their limited material requirements, they were a nation that was truly free. Ironically, their freedom was taken away by their admirers when they were forced to adopt European practices, religions and general ideologies. It 1886 it was declared that the Indians needed to be ‘safely guided from the night of barbarianism into the fair dawn of Christian civilization,’ which became the responsibility of the missionaries.

In 1817, the Cherokee were the first tribe to be recognized as US citizens when a treaty was signed. Gradually other factors were included in deciding who would be allowed to become a citizen. These included: being born in the country, becoming a part of the military, and marriage to a US citizen. By the start of the 20th century all Native Americans had become citizens of the country. 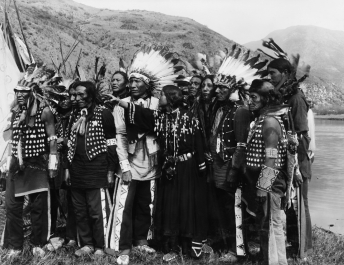 In 1887 plots of land were granted to individuals, in order to help them adapt to civilized ways. The plots could not be resold for 25 years but the remaining land could be sold to settlers. This decreased the amount of land that the Indians had been granted from 154 million acres to 48 million in 50 years, and limited the possibility of their growth.

Even though the American Indians were integrated into the customs of the immigrants, many of them held on to parts of their culture and today there are Aboriginal traditions still being continued in parts of the country.