When Columbus discovered America in 1492, its indigenous people were already scattered across the land. Spanish settlers, and others that followed, began referring to the different ethnic bands, tribes and groups collectively as American Indians. Other terms used by these colonizers were Native Americans, Indigenous People and Aboriginals. The tribes were scattered throughout what is now the United States and Mexico, and the bands mixed and mingled mostly peacefully.

Before the arrival of the Europeans in their land, much of the history of the Native Americans was preserved by word of mouth, or in various forms of artwork. The colonization of their home led to significant changes, which the Aboriginals had to endure. There has been much written about their conflict with the settlers, either by European supporters or those that believed they should be responsible for the civilization of these natives. 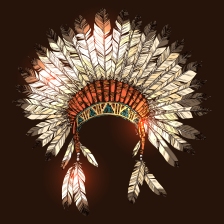 In pre-Columbian America the Indians survived by agriculture, which was undertaken at a personal level or on a larger scale tribal effort, and hunting. The survival of the natives and the giving back to the land was the concern of the entire community. Europeans brought several concepts to the Americas which were the catalysts for the significant decrease in the Indian population. These were: the idea of individuals owning plots of land, the concept of war, and ethnic violence and discrimination which all went against the Native American way of life. Another factor that increased the rate of their deaths was being exposed to European diseases e.g. smallpox, which they had no immunity to.

Under the leadership of President George Washington, it was decided that the tribes would need to become more civilized in order to be a part of the United States. This Assimilation of the Native Americans lasted from 1720-1920, and many tribes voluntarily joined the effort while others continued to resist for many years. Indigenous land was threatened constantly during the period as a result of the expansion of the colonized area and endless fighting.

In 1830, the United States congress signed the Indian Removal Act, which stipulated that tribes that volunteered would be relocated from the established states to west of the Mississippi. Even though, in theory, the Native Americans were not to be forced from their ancestral lands many of the tribes were, which contributed to thousands of deaths during the next 8 years.

The journey itself, as the first of its kind, was the cause of many of the fatalities. The path that they took is now referred to as the Trail of Tears, or Death Marches, because of the many lives lost along it. Even though they were escorted by the militia, the journey over the rough terrain exposed the Indians to disease, attacks and starvation.

There were five major tribes governing themselves which needed to be moved: Cherokee, Chickasaw, Choctaw, Muscogee, and Seminoles. In 1831, the Choctaws were the first to voluntarily make the journey, with the Seminoles, Muscogees and Chicksaw following in 1832, 1834 and 1837 respectively. They were accompanied by many freed African slaves who wanted a fresh start.

After pressure from the settlers for more land, on May 23, 1836 President Andrew Jackson authorized The Treaty of New Echota, which stated that the American Indians had two years in which they should move to their new territory (Oklahoma). Very few Cherokees left of their free will and despite a long, hard fight to retain their land over 25 million acres was forcibly taken and 40, 000 people relocated.

The last of the Cherokees were put into camps in November of 1838, and marched west in groups of 1000 at a time. The deaths along the route increased during these marches due to depleted supplies on the trails, regular attacks along the way, disease, starvation due to insufficient rations and the change in weather which included extremely low temperatures, snow and heavy rains.