Tallapoosa County, Alabama, which was formerly known as Horseshoe Bend, witnessed a violent and bloody war on the morning of March 27, 1814. The Battle of Horseshoe Bend became known as the deciding battle of the Creek War between the American Indians and the European Americans. The grueling years of misery, treaties and battles for the Indians led to this deciding moment, which also contributed to America’s history of conflicts and formation. Let’s explore the events that led to The Battle of Horseshoe Bend and the battle itself.

What Led To The Battle of Horseshoe Bend?

The Muskogee tribe lived alongside the east central Alabama and west central Georgia rivers. The Anglo-American settlers divided the creek towns geographically into two main groups – the upper towns and the lower towns. Three years before the battle of horseshoe bend, Tecumseh, the military leader of the Shawnee tribe urged the south-eastern tribes to drive away the Americans from their inherited lands and to keep up with their traditions. When the war broke out between Great Britain and the States in 1812, Tecumseh along with some creek warriors helped the British fight against the Americans. This war turned into the notorious Creek War, which lasted from 1813 to 1814. This war started between the Red Sticks who belonged to the upper towns and despised Americans, and the Lower and Upper towns that were allies of the State. The Creek War became a massive affair after the Fort Mims Massacre, which was a retaliation by the Red Sticks against the American and Creek settlers who were at Fort Mims on 30th August 1813.

Andrew Jackson was appointed by Tennessee’s governor to lead the soldiers into the Creek. On March the 16th, 1814, Jackson and his army were camping near Horseshoe Bend to attack the Red Sticks with an army consisting of 3,300 men, out of which 100 were from the lower creek and 500 were from the Cherokee tribe. On the other side was Ofkuskee’s war leader Menawa and his army of 1,000 warriors from the Red Stick tribe. Almost 350 children, women and elderly were also there at the time. There was a provisional village constructed at the bend of Tallapoosa River, where towns from the Upper Creeks such as Hillabee, Oakfuskee, Fishponds, Newyaucau and Eufaula sought to protect themselves. They had also constructed a barricade of dirt and log, which was almost 400 yards long along the bend to hold attackers off till the elderly, women and children could escape. 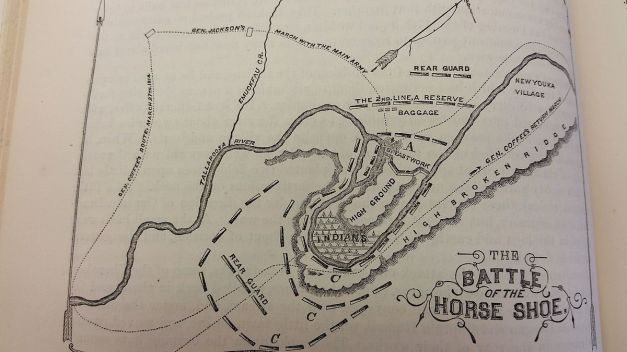 At 6:30am in the morning, on the 27th of March 1814, Andrew Jackson started to divide his army. General John Coffee and his force which consisted of 600 warriors and 700 riflemen were placed 2 ½ miles away from the village, surrounding it. Jackson’s forces were then headed directly towards the barricade. The Thirty-ninth Infantry, who were the most trained soldiers of his were leading the attack. Jackson first used his cannon to make a hole in the barricade and then for two hours straight, guns were fired at the barricade as well. The Red Sticks warriors  could only combat hand to hand. Coffee’s forces crossed the river to attack and burn the village from the back. Of course, it was obvious who would won, as Jackson’s forces were armed and double in number to the Red Sticks.

Over 800 of the Red Sticks had died, whereas in Jackson’s army only 49 were killed. 350 women and children of the lower creek tribes and the Cherokee were captured and taken as prisoners. The Battle of Horseshoe Bend had ended the Creek War.