The main pathway followed by Americans looking for new lands and opportunities on the frontier, during the 1800s, was known as the Oregon Trail. The route stretched 2000 miles from Missouri, over the Great Plains and the Continental Divide, ending in the Californian gold fields and the Willamette Valley. Between 1840 and 1860 more than 400,000 pioneers travelled along its path. They braved a perilous journey, often overcoming extreme hardships such as the outbreak of disease, wagon accidents and rough river crossings. It is estimated that at least 20,000 deaths occurred along the Oregon Trail, the majority of which were a result of cholera and other diseases.

Those making the journey often spread out for several miles and avoided travelling along the same route. It made it easier to avoid the dust kicked up by other groups, find grazing patches for the animals and hunt along the way if a relatively secluded path could be found. The Native Americans in the area would accept positions as guides with some groups, and many of them traded with the travelers. To protect themselves against drafts, and prevent their animals from wondering off, pioneers would park their wagons in a circle.

The Oregon Trail was initially considered to be too harsh for women and children to traverse. The first group with a female crossed in 1836, when missionaries Marcus and Narcissa Whitman took a small party of wagons from St. Louis to the Walla Walla Valley. Narcissa wrote many letters home about her journey, and they were later published in Eastern newspapers. This encouraged other women to make the journey. In 1843, Marcus himself helped to lead the first wagon train of 1000 settlers, now known as ‘The Great Migration,’ along the trail. 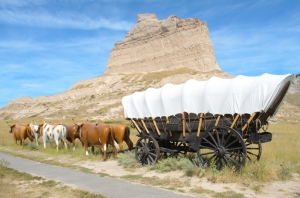 Many of the pioneers carved their names, dates of passage and their hometowns in rocks along the way, to commemorate their journey. ‘The Register of the Desert,’ a 128-foot-tall granite outcropping in Wyoming, has thousands of names carved in it. Travelers would camp out by the Sweetwater River nearby, and detour to leave their mark. Signing the register could take a long time and needed tools to be effective. Many pioneers would pay rock carvers to do the job, as this was easier.

Most of those that crossed the Oregon Trail didn’t settle in Oregon. Many of them left the main route at Wyoming or Idaho, to take trails leading to California and Utah. About 250,000 of the 400,000 people that crossed, detoured unto The California Trail, to seek their fortune in the gold mines. The last wagons crossed the trail in the 1880s, but the mass migration that took place had left its mark. There are sections of the trail that were so heavily imbedded with wagons wheels that the ruts are still visible today. Imprints were also left in the stone along the path and the grasslands worn down so much that they still have no plant growth.