The Rocky Mountains, also called The Rockies, extend from the northernmost part of British Columbia, in Canada, to New Mexico. The mountain range formed between 80 million and 55 million years ago, when Pangaea broke up and North America began to move westwards, and is currently over 3,000 miles long. It consists of at least 100 separate ranges, including: the Canadian and Northern Rockies, Middle Rockies, Southern Rockies and The Colorado Plateau. The subdivisions all have different geological and physiographical characteristics.

The mountain range is home to many national parks, monuments and preserved wilderness areas, with much of the land designated to natural or provincial forests. In addition, there are many human settlements, which are mostly near the base of the mountain range, due to the harsh climate conditions found higher up. Human presence in The Rockies is believed to have begun between 10,000 and 8,000 BCE, and the Europeans found nomadic and settled American Indian tribes living in the area, when they arrived. There are currently several Native American reserves located throughout the mountains.

Plants species on the mountain range vary significantly, depending on elevation, latitude and exposure. On the eastern slopes of Colorado and New Mexico there are stunted cedars and piñon pines, while lower elevations are mostly treeless, except for clusters of broad-leafed deciduous species, such as cottonwoods. The valleys and basins are home to lots of sagebrush, while the strong winds and harsh conditions limit the fauna higher to sturdy trees, such as: aspen, yellow pine, Douglas fir, red cedar and dwarfed willows. Wild flowers, including bunchberry larkspur, columbine and Indian paintbrush, are prevalent in the meadows and forests. 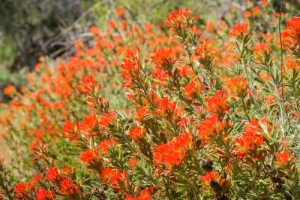 As well as the numerous plants, The Rocky Mountains has an abundance of animals. Large mammals such as black and grizzly bears, mountain wolves and wolverines can be found in different sections of the mountain range. Big-horn sheep and mountain goats live in the high crags during the summer, and migrate to lower slopes to survive the winter months. Different members of the deer family, such as elk, caribou, mule and white-tailed deer have a different migration pattern, moving vertically between the alpine meadows and subalpine forest cover. There are also wild horses, wolves and large numbers of bison, as well as small mammals such as red and ground squirrels, chipmunks, marmots and prairie dogs. The height of the mountain range also makes it an ideal home for many birds, such as peregrine falcons, bald and golden eagles, turkey vultures, owls, wild turkey, pheasants and jays.